Discipline in schools… why is it all gone?

“Since we are no longer allowed to discipline children in schools, everything is falling apart.” 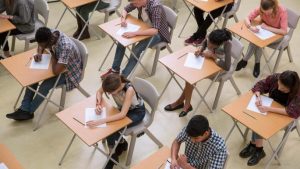 What is happening in schools?
The physical conditions of many schools are far from ideal – especially schools in historically underprivileged areas. Buildings are not always well maintained and look bleak and shabby. Classrooms may lack proper chairs and desks, having broken windows and doors that don’t close properly. Classrooms may not have proper lighting. While sometimes the facilities have not been well maintained, other times the poor conditions are the result of schools being broken into repeatedly and ransacked.

It is common for classrooms to be overcrowded, resulting 30 – 60 children in one classroom. Sometimes those children are not even in the same grade and one teacher has to deal with teacher more than one class at the same time! Even under ideal conditions, when 60 children are forced to spend and amount of time cramped into such a small space, it is inevitable that noise and chaos will result.

Many children struggle with learning difficulties, developmental delays or have special needs, but are forced to attend mainstream schools where they are effectively set up for repeated failure. These children lose hope, and so do their teachers.

Children are often absent from school. In these cases parents are often uninvolved in the education of their children and efforts by the school to meet with parents or engage them is met with silence. One wonders why children should display an interest in their education when their parents have even less interest?

Drug use and dealing in drugs are common, even on school grounds. Schools are often powerless to address the high levels of drug use in communities where dealing takes place on the streets in broad daylight and interference is met with violence by gangs.

In communities with high rates of poverty and unemployment violence is commonplace and gang wars often taken place, placing children in the crossfire. Children are exposed to violence as an everyday occurrence and they accept it as “normal”.

Families suffer more in these communities. No family is immune to parental discord, domestic violence, substance abuse or neglect and abuse, but in high risk communities these challenges are felt even more. Children in unsafe families who live in unsafe neighbourhoods have nowhere to find safety, except perhaps at school….

It would be a mistake to think that childhood adversity is a problem of poor communities and dysfunctional families. Poverty may make the problem more visible, but financial security does not safeguard anyone from the impact of adversity and toxic stress.

What is toxic stress and childhood adversity?
A landmark research study in 1997 connected the adverse childhood experiences of children with negative health and social outcomes. The study demonstrated that children who grow up with childhood adversity are likely to develop a range of health and social problems. The initial study focused on the following 10 adverse childhood experiences, also called ACES:
• Physical, sexual and emotional abuse;
• Physical and emotional neglect;
• Growing up in a household with domestic violence, alcohol or substance abuse, mental illness, parental separation or crime.

The study found that ACES are very common, with up to 2/3 of all people having experience at least one ACE during childhood. However, the ACES tend to cluster together; where there is 1 ACE, there is likely to be more. For example, where we find alcohol or drug abuse in a household, we are more likely to also find domestic violence, crime, and neglect or abuse of children.

When children are routinely exposed to ACES, they become overloaded with stress hormones, leaving them in a constant state of arousal and alertness to environmental threats. This alarm response makes it difficult for them to focus or consolidate new memories, making it harder to learn in school. ACES can alter the structural development of brain networks and way the immune system functions, which have long-term negative affects on the body. Children who have been exposed to 3 ACES are three times as likely to fail their grade, six times more likely to have behavioural problems, and five times more likely to have attendance problems. They also have difficulty building and maintaining relationships. ACES are also correlated with depression, suicide, teenage pregnancy, lowered immunity and various diseases.

When routinely exposed to adversity, the fight-or-flight response of childen change from a normal, life-saving system into a maladaptive and health-damaging system. Dr. Nadine Burke explains it like this: Imagine you’re walking in the woods, and you encounter a bear: immediately your body releases the stress hormones adrenaline and cortisol; your heart starts to pound, your pupils dilate and your airways open up. You are ready to either fight the bear, or run from it. And that is great… if you are in the woods, and there is a bear. But what happens when the bear comes home every night?

Here is another metaphor: Most people can identify with having an alarm in their house to warm them about possible invasion. When the alarm goes off at night, it is all systems go; things happen very fast and you implement all your safety plans, only to realise it is a false alarm. The first time this happens it is not a big problem – false alarms happen. But what happens when the alarm keeps going off every night and you can no longer trust it to identify real threats?

Children who are exposed to this repeated stress activation may not be able to identify real threats anymore, and when their alarm response is activated, they respond as if it is a real threat. Since this alarm response system has become maladaptive, they perceive threats all around them. They respond either with a flight or fight response. Children who habitually respond with a flight reaction may withdraw and avoiding interaction, because it is safer. They also tend to internalise their pain and for this reason they are often not identified by teachers as “problem children”. Their pain is real, but it goes unnoticed. They are more likely to suffer from depression, anxiety, psychosomatic illness and are also more likely to be at risk for suicide. Children may also respond with the fight reaction – aggression. They tend to externalise their pain, and therefore are most likely to be identified as “problem children”, because they are constantly on the teacher’s radar. We can think of their responses to their perceived behavioural threats as pain-based behaviour .

What happens when the challenging behaviour of these children are met with punishment? What happens when the school becomes another environment that strengthens the activation of an already-dysfunctional stress-response system? When these (behavioural) difficulties are met with punishment in the school, this repeated stress-activation is only further strengthened and children become less and less likely to cope with learning and relationships.

Now, many people may ask: How should we then deal with inappropriate behaviour? Surely, we cannot do away with discipline completely? Well, here is the thing… this behaviour is not inappropriate. It is appropriate, given the context and circumstances that creates it. It is only inappropriate when we ignore the circumstances that create the behaviour. When children display “normal” challenging behaviour – as a result of curiosity or boundary testing, then “normal” discipline is appropriate and likely to be effective. When children’s behaviour are driven by adversity which changes the way their developing minds and bodies function, “normal” discipline is unlikely to be effective on its own, and a more sophisticated approach is needed. Such an approach should help children learn how to regulate their emotions and behave appropriately, without strengthening the cycle of toxic stress.

What can parents and teachers do?
Schools that adopt a trauma-informed approach to dealing with challenging behaviour help children to recognise their reaction to stress and learn how to control it. Such a school recognises the link between how children feel and how they behave. When children are empowered to understand and deal with their emotions and reactions to toxic stress, they are better able to adapt in the school environment and more likely to succeed academically.